TIP OFF TIME FOR THE NBA 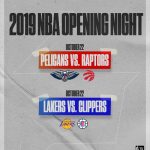 TIP OFF TIME FOR THE NBA

The new NBA season gets underway on Tuesday evening with a bang when the Los Angeles Clippers host the Los Angeles Lakers at 7:30 pm PST at the Staples Center, which is currently the home of both LA franchises for the time being.

Both teams have undergone some significant changes during the off season and the ‘City of Angles’ is ripe with anticipation for the games to begin.  Most famously the Lakers traded away some valuable future pieces to get big man Anthony Davis away from the New Orleans Pelicans to team up with LeBron James in hopes that the Lakers will at last achieve the necessary quality of chemistry to return the team and the franchise back to its glory days of old.

The Clippers, on the other hand, went out and recruited NBA Finals MVP Kawhi Leonard from the Toronto Raptors as well as All Star journeyman forward Paul George to make up another dynamic duo to take on the mighty Lakers with James and Davis waiting at center court.

But the intercity big boy basketball battle began with the preseason during which the Clippers played only 3 games; and they lost all three of those games scoring only an average of 91.3 points per game, which is surely not what Head Coach Doc Rivers or owner Steve Ballmer had in mind to kick off the season.

The Lakers managed to get in 6 games during the preseason and split then 3-3 averaging 107.3 points per game, which is not bad, but which falls a bit short of the 125.6 points per game put up by the NBA leading New Orleans Pelicans, who played 5 preseason games and went undefeated, 5-0.

Tragically for the Pelicans and for basketball fans everywhere, Zion Williamson, the first round draft pick that has given the New Orleans NBA franchise such hope for the future, sat out the final game of the preseason with what he thought was just a sore knee, but ultimately the injury was a torn right lateral meniscus which has already been surgically repaired.

The very popular young Zion is expected to miss 6 to 8 weeks of the regular season but hopes to be back on the court for the Christmas NBA games.  Las Vegas oddsmakers will have fun figuring out how to adjust the lines this season.

While Paul George will be out of action for the Clippers until November with a shoulder injury, Doc Roberts still sports a formidable roster with guards Patrick Beverly and Lou Williams as well as Landry Shamet and the big center Montrezl Harrell returning.  They also have 7’7” ‘Mostar Man’ Ivica Zubac from Mostar, Bosnia to contend with who is a handful for any defender on any team anywhere.

The addition of six time NBA All Star forward/center Anthony Davis is expected to infuse new life into the sagging Lakers franchise and give the uber-talented LaBron James somebody to play with on somewhat the same level.  It should be fun for Lakers fans to watch this duo develop and surely a blast for James, who was clearly frustrated out on the court last season.

LeBron told reporters, “Opening night is great.  For me, it’s like the first day of school.”  All around the NBA there are similar sentiments going around locker rooms everywhere as professional basketball players, young and not so young, get ready to tip off yet another exciting season of blistering NBA action.

Tip Off is Tuesday evening at 5pm PST when the Raptors host the Pelicans, listed at -7, in Toronto and then at 7:30 PST with the Clippers hosting the Lakers as 3 point underdogs at the Staples Center in Los Angeles.