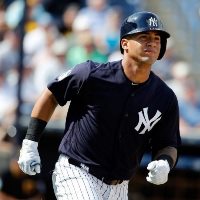 For Yankees second baseman Gleyber Torres this season has had everything: An All-Star first half, a disabled list stint, a slump, and most recently, a scorching resurgence.

Torres, like most rookies, had had to adjust constantly to navigate his way through his first season in the majors. After a first half that sent the 21-year-old rookie to the mid-summer classic, Gleyber struggled mightily as he batted a measly .154 over his first 18 games back from the disabled list.

Since then it’s been a complete 180 turnaround for Torres. Between August 16 and September 9 Torres was the Yankees’ best hitter. In 23 games the rookie hit .358, with five homers, a .556 slugging percentage and a .438 on-base percentage, all of which led the club in that span.

Torres launched his 23rd home run on September 7 and that tied him with teammate Miguel Andujar for the American League rookie lead. The homer was also the 100th hit of his short career, which made him the fourth-youngest Yankee in franchise history to accomplish that feat. He is, in fact, the youngest Yankee since 20-year-old Mickey Mantle to reach 100 hits in a season.

Torres energized the Yankee this season as they won their first eight games after his call-up to the majors and he’s is looking to do it once again. After a season of adjustments, he’s peaking at the right time as the team looks to make its push towards the postseason.