UFC 213: Nunes Looks to KO Schevchenko In Their Second Fight 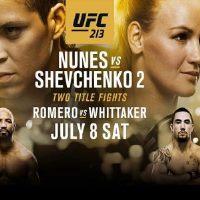 Kyrgyzstan’s Valentina Shevchenko (14-2) will fight against Brazil’s Amanda Nunes (14-4) on Saturday for the Women’s bantamweight title at UFC 213 in Paradise, Nevada.

If the first fight was exciting and very close, this main event bout promises to be better as Nunes’ bantamweight belt will be at stake.

Although the Brazilian was victorious in their previous non-title fight, she was not completely satisfied because she got the win by unanimous decision, while she expected to knock Shevchenko out.

The Kyrgyzstani is the only UFC fighter who has forced Nunes to go the distance and complete three rounds, however she failed to show the judges she deserved the victory.

Shevchenko became Nunes’ number one contender to the bantamweight title after defeating Julianna Peña by submission on January 28.

In their last fight, the Kyrgyzstani made use of her kickboxing to keep Nunes at bay and go the distance, but this time she has to start her attacks faster and be more aggressive if she wants to win.

She can’t rely on the judges this time around, not only because they could once again pick Nunes as the winner in a close fight, but also because the Brazilian has already announced she will go for the KO to keep the fight short.

In a recent Twitter live broadcast by the UFC, where she answered questions from the fans, the Brazilian predicted that this time around she will finish the job and knockout her opponent.

The Brazilian has improved as she’s proven to be a more complete fighter. Not only she continues to be a strong puncher that can knockout her opponents, but now her jiu-jitsu has improved greatly and she hopes to use it to beat Shevchenko.

Nunes defeated Miesha Tate via submission on July 2016 to earn her bantamweight belt. This will be Nunes second defense of her title, the first was against Ronda Rousey last December.