Umps Should Be Seen & Not Heard 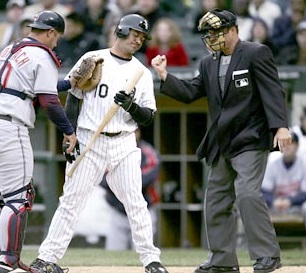 Mr. Tom Leppard, who is the Major League Baseball Umpire Supervisor, told the press, “In the umpiring profession, we often say that an umpire has done his job well when no one knows he’s there.”

That sounds about right, but, that’s not what has been happening in ball parks around the country of late. Umpires are speaking out… perhaps a little too much.

In just eight days of baseball, there were at least three noteworthy little spats between umpires and players that detracted the attention of the fans away from the game that they came to see.

Ump Tom Hallion seemingly picked a fight with the Tampa Bay Rays and did not come out smelling like a rose.  What was he thinking?

One relatively young umpire managed to incur the wrath of veteran Yankees ace pitcher CC Sabathia causing him to scream out, “Shut the f___ up!”  What in the world caused that outburst from a usually conservative baseball pitcher?

Then Bryce Harper of the Washington Nationals got thrown out of a game by umpire John Hirschbeck and left broadcasters wondering what the dustup was all about in the first place.

Actually, this has been going on for awhile now.

Major League Baseball Umpires are probably the best officials in all of sports. Sure, they miss a call from time to time, they are human. It happens. Some of the calls that the umps are asked to make are extremely close and hard to call. Very difficult to get it right with the naked eye but these guys almost always get it right.

So, perhaps it would be better if the umpires just ignored the screaming players, coaches and managers or, respond to them in a calm voice without making any physical gestures at all. Wouldn’t that be nice?

Dale Carnegie taught us that “the only way to win an argument is to avoid it.”

MLB Umps should take note of that. At least out on the playing field during the game, don’t let anger and frustration take over and cause major league distractions for the season ticket holders.