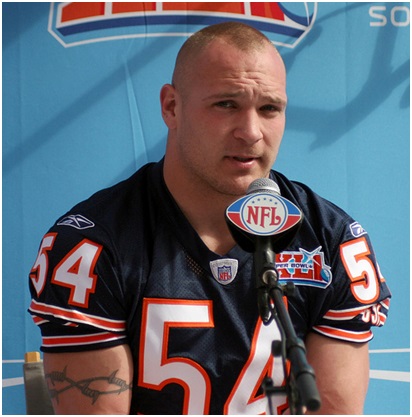 Nobody wants to see the great Chicago Bears linebacker Brian Urlacher in another uniform… especially one with horns on the helmet! Remember how sad Brett Farve looked in purple.   Urlacher’s got to go out as a Bear.

Somehow the Bears front office did not handle parting ways with Brian Urlacher with much style and grace.  Actually, it was pretty cold, impersonal and downright ugly.  A guy plays his heart out for you for 13 years, is the very soul and spirit of your team and gets treated like a stranger by the very people that he has been representing for so long on the gridiron.

It’s an uncomfortable situation at best.  Urlacher expressed his disappointment that he never received a phone call from Bears team chairman George McCaskey during any part of the process.  McCaskey obviously wants to let his team managers and coaches manage the team as they see fit but, this is Brian Urlacher we are talking about here.  McCaskey even told the press that he was “heartbroken” over the loss of Urlacher.

Brian Urlacher is 35 years old and yes, he has had some injury issues in the past couple of years.  But, he is still one of the baddest linebackers out there.  Old and hurt or not, I surely would not want him chasing after me with a smile on his face and that gleam in his eye… no way!

McCaskey went on to say, “Our whole family is heartbroken over this.  Brian’s just been the face of the franchise, an outstanding Bear on and off the field.”

There were hurt feelings on both sides of the issue.  The Bears front office remained silent and Urlacher never once had a bad word to say against the Bears organization.  Finally, George McCaskey reached out to his favorite Bear and spoke with Brian.  As McCaskey put it, “He was very gracious.  Brian knows how we feel about him. He’s one of the all-time great Bears.”

So, the ball is back in the court of Bears General Manager Phil Emery and the new Head Coach Marc Trestman.  McCaskey is not going to tell them what to do….but, he has made his point and in public.

Long time teammate Henry Melton commented on how “strange” it was not seeing Urlacher there when he arrived at Halas Hall to begin the offseason program.

Even if he is too hurt to play much, Brian can still make an invaluable contribution to the Bears and a linebacker coach.  Who on the planet knows more about the linebacker position that Brian Urlacher?