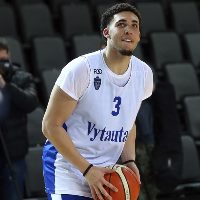 Li Angelo Ball has declared for the 2018 NBA draft, but apparently, not many people believe he will get drafted by any NBA team.

Although it’s very easy to see him going undrafted, there might be a slight chance that a team is desperate enough to take a gamble on him.

He hasn’t played badly in Lithuania where he’s been playing professional basketball and averaging 15.7 points per game along with 45 percent shooting from three-point range.

One team that could roll the dice on LiAngelo are the Atlanta Hawks, who are pretty shallow at the shooting guard and small forward positions, so he could potentially get a chance to see some playing time there.

The Orlando Magic are facing a similar situation to the Hawks as they need players capable of doing some sharp shooting and that’s one of the only things that LiAngelo has proved he’s capable of doing.

The Magic are in fact so bad that is likely they will need to tank again next season and if that happens it would prove to be a great opportunity for LiAngelo to play extensively and develop his game at the NBA level to see if the team decides to retain him in the long run.

Another team that could draft him, but most likely won’t are the Los Angeles Lakers. Although this move would pair him with his older brother it’s unlikely to happen. The Lakers have not enjoyed dealing with his father, LaVar Ball, in Lonzo’s first season and drafting LiAngelo would mean they would need to tolerate his antics even more.

Instead, the Lakers are more likely to wait and see if he goes undrafted and could sign him as a free agent and send him to their G-League affiliate team to give him a chance to prove himself and if he does he could be called sporadically if injuries occur.

If none of these things happen, look for LiAngelo to keep playing in Europe to further develop his game and hoping to eventually attract the attention of a desperate NBA franchise to sign him as a free agent.