Vilma & Williams Are Killing The Saints 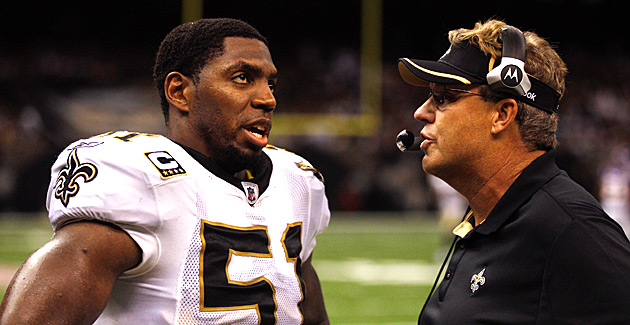 The bounty gate mess just keeps getting uglier & uglier. Dragging it all out in the media is acting like a big wet blanket on the team spirit of the New Orleans Saints. You can see it on their faces. That great unified team spirit that we have come to expect from the Saints, just ain’t there.

Now it is back in the headlines once more with the accusations growing more and more aggressive every day. Jonathan Vilma may just end up winning his case and sinking his team in the process.

Williams and Cerullo appear to have provided most of the evidence the league used in the historic punishments of Vilma, three other current or former Saints players, plus head coach Sean Payton, general manager Mickey Loomis and assistant head coach Joe Vitt.

“I don’t know what Gregg Williams’ motives are, but I do know that any suggestion by Williams that Jonathan put up $10,000 as an incentive for his teammates to injure another player is absolutely false.” Vilma tweeted on Monday night that Williams was “bullied to sign the affidavit,” saying Williams signed it on Friday. Williams is now with St. Louis, though he has been suspended indefinitely. An associate of his said Williams did not want to talk to the media.

Great going Gregg, stir up a big mess then go and hide.

As for the bounty issue, the NFL brought this to our attention in March. But here we are in September, still talking about it with no real end in sight. That is also not good for the game.

Likewise, the NFL has already made its point about its no-tolerance policy for bounties. Gregg Williams may never coach again, and Sean Payton has to stay away from the Saints for an entire year. The message has been sent—no bounties. Then, to get the focus back on the field, the NFL should find a way to make a deal with these players to end this for the good of players, coaches and fans alike.