White Sox & Tigers Battle It Out For The Al Central Title 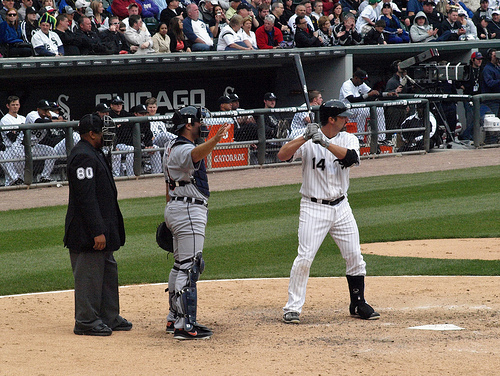 The American League Central is one of the best races in baseball, and the Chicago White Sox take a big step forward with a 5-4 win over the Detroit Tigers in a makeup game for an earlier rainout. Detroit now trails Chicago by three games with 16 to play. The core of the 2012 White Sox highlight reel will feature great moments like Philip Humber’s perfect game and the 400th career homers by Paul Konerko and Adam Dunn to name a few from this surprising South Side success story.

Right behind those standout performances, on par with a Chris Sale shutout or one of the team’s six walk-off hits, will be Alex Rios’ fifth-inning slide from Monday’s 5-4 victory over the Tigers before 29,130 excited fans at U.S. Cellular Field in Chicago.

This was a hard slide into Detroit second baseman Omar Infante that broke up a potential inning-ending double play and allowed Dunn to score the tying run and Konerko to score what turned out to be the winning run when Infante’s errant relay throws skipped by first baseman Prince Fielder. But it was so much more.

That extra effort from Rios, coupled with four hitless innings turned in by Nate Jones (8-0), Donnie Veal, Brett Myers, Matt Thornton and Addison Reed (27th save), just might have dealt the Tigers (77-69) their deciding blow in the chase for the American League Central title. With 16 games remaining, the White Sox (80-66) hold a three-game lead and have a magic number of 14 to officially eliminate the Tigers.

With four straight victories, the White Sox are sliding their way to the postseason much like Rios did in Monday’s makeup game of last Thursday’s rainout.

Those interested in betting either of these teams to win the American League Pennant will find the odds to be around Detroit Tigers at 4 to 1 or the White Sox at 5 to 1!