Why Reggie Bullock Should Thrive With The Lakers 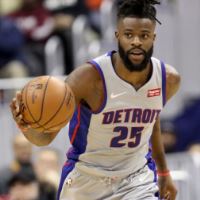 The Detroit Pistons traded Reggie Bullock to the Los Angeles Lakers in exchange for rookie shooting guard Sviatoslav Mykhailiuk and a second-round pick.

The Lakers acquired Bullock’s rights so that should give them the upper hand should they be interested in re-signing him next offseason when he becomes a free-agent.

The 27-year-old Bullock, who is making $2.5 million, will come off the bench and likely play a big role as he’s expected to help the Lakers in their weakest area which is shooting.

Bullock’s having a career year as he’s averaging 12 points, 2.7 rebounds, and 2.5 assists per game. He was shooting 38.4 percent from three-point range while playing 30.8 minutes per game in Detroit.

He’s a good shooter and should benefit from playing next to LeBron James as he’s in the 83rd percentile on points per possession in catch and shoots. Since James likes to attract the attention of defenders on drives and then kick the ball out to open perimeter shooters, Bullock was the right type of player to bring to the Lakers.

Bullock could see about 25 minutes per game and should thrive with Los Angeles as he should see plenty of open looks from three, which could help him improve his effectiveness and shot percentages.

Although Bullock isn’t an elite defender, he should also help the Lakers on the other side of the court as he can guard both forwards and guards and has a 6’11 frame that should allow him to switch easily on defense.

Overall, he’s a good upgrade at the wing that will help the Lakers address their weakest area as he’s an elite spot-up shooter that should pair nicely with LeBron. Best of all, he came cheaply for the Lakers as they didn’t have to dish too much in return.