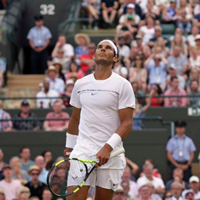 Spanish tennis player Rafael Nadal, second in the ATP ranking, and German Angelique Kerber, number 1 in the WTA ranking, were both eliminated on Monday from Wimbledon, in a day that saw Andy Murray, Roger Federer and Garbiñe Muguruza punch their ticket to the quarterfinals.

Novak Djokovic’s match against Frenchman Adrian Mannarino was postponed to Tuesday due to the duration of Nadal’s match. The Spaniard lost an epic match of almost five hours against Luxembourg’s veteran Gilles Muller 6-3, 6-4, 3-6, 4-6, and 15-13.

Muller will now face 28-year-old Croatian Marin Cilic, sixth in the world, who won the US Open in 2014 and has reached Wimbledon’s quarterfinals for the second year in a row.

Britain’s Andy Murray, the world number one and defending Wimbledon champion, beat Frenchman Benoit Paire and will now play American Sam Querrey for a place in the semifinals.

Federer, who is looking to win a record eighth Wimbledon trophy, beat Bulgaria’s Grigor Dimitrov, and will take on Canada’s Milos Raonic who defeated him in the 2016 semifinals.

Czech Tomas Berdych, who defeated young Austrian promise Dominic Thiem in five sets 6-3, 6-7, 6-3, 3-6 and 6-3 awaits for the winner of the Mannarino-Djokovic match.

In the women’s side all the round of 16 matches were played and the quarterfinals matchups are now set.

Spain’s Garbiñe Muguruza (who defeated Kerber 4-6, 6-4 and 6-4) will face Russia’s Svetlana Kuznetsova; Slovakian Magdalena Rybarikova will play American Coco Vandeweghe and American Venus Williams will face Latvian Jelena Ostapenko. In the other matchup Great Britain’s Johanna Konta will go head-to-head with Romanian Simona Halep, who will take Kerber’s number one spot if she reaches the semifinals.