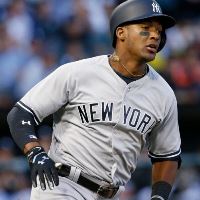 This season it seems that every week a young New York Yankees player is breaking a major league baseball record or earning an award.

Andujar was named the American League Rookie of the Month for June. This is the first career monthly award for the Yankees’ young third baseman and the second straight month that a Yankees rookie wins the award.

Andujar is the sixth Yankee player to win the award, joining three of his teammates: Gary Sanchez, Aaron Judge, and Gleyber Torres, who won it just last month.

In 25 games he hit .264 with 10 runs, six doubles, seven home runs, and 20 runs batted in (tied for first), along with 13 extra-base hits and a slugging percentage of .560 as he led all rookies in home runs and extra-base hits.

Entering 2018, the third base position was one of the few question marks that the Yankees had on a roster full of stability at almost every position, but Andujar has superbly filled the position superbly and now looks as he could own it for years to come.

Andujar collected 12 hits through the first eight games of his award-winning month, in which his heroics included the first grand slam of his career against the Toronto Blue Jays on June 5th.

Andujar is seeing the ball well this season but still has shown enough maturity to wait for the good pitches and not be so much of a free swinger that strikes out constantly.

Andujar has also made considerable defensive improvements this season and is proving that he will not be a liability for the Yankees on the field when he puts on his glove.

The Yankees have always known that he could swing the bat, but they were not sure how solid his defense would be. Now he’s proven that he’s becoming a complete player and is turning what was supposed to be a liability into one of the team’s strengths.

Furthermore, Andujar has become one of the most dangerous hitters in the Yankees lineup and should see plenty of action as long as he stays hot.