Yankees Projected To Break Several Records In Second Half 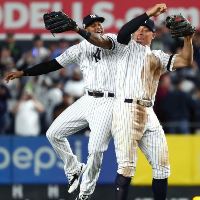 It was a marvelous first half of the season for the New York Yankees as they enter the All-Star break with a 62-33 record, on pace for 106 wins.

In fact, their .653 winning percentage is the highest since 1969 by any team outside of first place at the break.

The depth of the Yankees roster and their offensive firepower has been the talk of the town so far, especially with the Bronx Bombers threatening the single-season home run record of the 1997 Seattle Mariners.

Those Mariners crushed 264 long balls and the 2018 Yankees are currently on pace for 275, despite the extended absences of catcher Gary Sanchez and first baseman Greg Bird.

Regardless of whether or not the 2018 Yankees can break the Mariners 1997 record, they will in all likelihood shatter the franchise record of 245 set by the 2012 team.

The Bombers will benefit from Giancarlo Stanton leaving behind a slow start to the season. After struggling in April, the All-Star outfielder is now projected to hit 39 home runs with 94 RBIs.

Stanton is a notoriously slow starter and despite this year struggles he only had three more homers by the All-Star break last season when he finished with 59 and ran away with MVP honors.

In 2017 Didi Gregorius set a franchise record for more home runs in a season by a shortstop with 25. This year he already has 17 and looks poised to break his own record as he’s on pace to finish with 29 dingers. Very unexpected from a guy who had a mere 13 career home runs when he was acquired from the Arizona Diamondbacks in a three-team trade.

Another good sign for this year’s Yankees is that there’s been no sophomore slump for Aaron Judge. The 2017 Rookie of the Year award winner is on pace for 43 home runs, 102 RBIs, and 113 walks while continuing to display his strong defense in right field.

On the mound, the Yankees pitching staff has been mowing down batters at a historic rate. Although last year the Yanks set a franchise record with 1560 strikeouts the 2018 team is on pace for an outstanding 1611 Ks.

All-Star pitcher Luis Severino is threatening Ron Guidry’s 1978 franchise record of 248 strikeouts in a single season. The Dominican ace is on pace for 246 despite having just 12 K’s in his last three starts. Severino is also on pace for 24 wins, which would be the most by a pitcher in a Yankee uniform since Guidry won 25 in 1978.

Yankees are trailing the Boston Red Sox by just 4.5 games, but with 10 games remaining between the two the Yankees will look to keep up the pressure by adding a few valuable pieces before the trade deadline to help them take care  of business