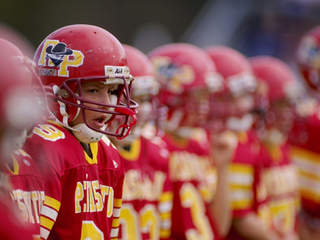 After an 18 month investigation by the Broward County Sheriff’s Office into gambling on youth football, nine youth football coaches or associates in South Florida are facing felony charges in connection to a gambling ring that’s linked to little league football.  The investigation exposed flagrant betting during games in the South Florida Youth Football League in and around Deerfield Beach.

Felony bookmaking, which is essentially organized gambling, is punishable by up to five years in prison. It is very alarming that ex-cons are allowed to coach children or be around them in this kind of capacity. Apparently those in charge of supervision of the Youth Leagues must not conduct background checks for anyone who volunteers to be a coach in a youth league sport. We all hope that things will change as a result of this scandalous crime.  These kids range in age from 5-15 years old!

Though the games featured little boys on the playing field, the gamblers made big bets, said Detective. Solomon Barnes of the Broward County Police, whose confidential informant, along with undercover deputies, placed bets on youth football during the police investigation. Barnes said $20,000 was bet in a rivalry game between the Northwest Broward Raiders and the Fort Lauderdale Hurricanes a few weeks ago. And up to $100,000 would be bet on the youth leagues’ championship games of the season, he said.  As it turns out, the coaches were the ones promoting and organizing the bets and setting point spreads on the games. The gambling involved multiple youth football leagues.

Detective Barnes sent a message to the dozens of young players who will show up for practice this week, trying to make sense of what’s happened with the coaches in whom they placed their trust. “Continue playing a game that you love, trust your teammates, all the disciplinary things that are taught in football, but don’t go on the other side of the law,” he said. “Stay on the course. Follow your heart, follow your mind. Kids know right from wrong, and this is a great example of what wrong will get you.”