DÉJÀ VU FOR THE SAINTS 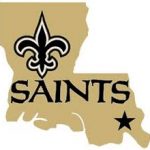 DÉJÀ VU FOR THE SAINTS

If anyone had been brave enough, or crazy enough, to put up a prop on the New Orleans losing another NFL Playoff game on a bad pass interference no call, the odds would have been astronomically high; but it happened, again.

Last year Saints fans and many sports writers howled indignation at the missed PI call that ended the Saints playoff hopes, after the game on Sunday this year the Saints sidelines seemed to be in a state of shock.  What just happened? No way! How? Why us, again?

But the final game winning 4 yard touchdown play from Kirk Cousins to Kyle Rudolph was reviewed by the officials and the TD stood, and the game was over.  So were the hopes and dreams of a New Orleans team that has been on the short end of the stick on too many of these situations for too long now.

Former NFL Referee Terry McAulay, who was the officiating crew chief at 3 Super Bowls, tweeted, “It is illegal for an offensive player to extend his arm or arms and create clear separation from the defender. That was Offensive Pass Interference or OPI”.

But the final decision on the play was made after review by the NFL’s Vice President of Officiating, Al Riveron, who defended his call by stating in his report, “There is contact by both players, but none of that contact rises to the level of a foul.  This is consistent with what we’ve done all year long, we left the ruling on the field.  We let it stand”.

Key to the non-call was the fact that the pass was ruled a touchdown on the field and as such required unequivocal evidence to overturn.  Such is the rule and custom of NFL officials these days, and it’s probably a good one.

A Monday morning review of the film reveals that Kyle Rudolph did, if fact, clearly extend his arm to keep Saints cornerback P.J. Williams away from the ball.  Power running back Dalvin Cook had been stopped short of the goal on the first two attempts from the four yard line, so, the 3rd down play was the Vikings last shot at a game winning TD before kicking a field goal and giving the ball back to Drew Brees.

Now Kirk Cousins was clearly the hero of the day.  He threw for 63 yards in the overtime period and moved the ball from their own 25 yard line to the Saints 2, then a swarming Saints defense stuffed Cook twice before Cousins threw the controversial TD pass that ended the game with a victory for the Minnesota Vikings and head coach Mike Zimmer.

So the Saints are out of the NFL Playoffs once again and a bitterly disappointed bunch of fans in New Orleans and all around the State of Louisiana will have to swallow the loss and put their hopes and dreams, once again, on Drew Brees, Sean Payton and next year.

The Vikings will next travel out to Santa Clara, California to take on a well rested San Francisco 49er team as 6.5 point underdogs, the winners to advance to the NFC Playoff game and face the winners of the Seattle Seahawks and Green Bay Packers game, which will most likely be played in much harsher, and colder, conditions up on the frozen tundra of northern Wisconsin than the Vikes will face against the 49ers out in sunny California!