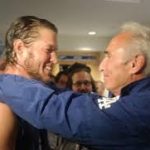 The comparison of Dodgers ace pitcher Clayton Kershaw and the legendary Sandy Koufax is easy to do.  The pieces fall right into place. Both are tall and lanky; both quiet spoken, but fierce competitors on the pitcher’s mound. Both men respected and admired by their avid fans and in the dugouts and locker rooms where so much of a professional ball team’s karma is evolved.

Sandy Koufax dominated major league baseball during the early part of the 1960’s winning every major award and honor that could be bestowed on an athlete in those days.  No hundred million dollar contracts back then, those would be years to come yet.

He only won 3 Cy Young Awards, was 2 times World Series MVP, 3 times MLB Triple Crown winner, 4 times World Series Champion and 7 times was named to the MLB All-Star Team.  Sandy Koufax also pitched 4 No Hitters and one Perfect Game on September 9, 1965.  In 1972 he was inducted to the Major League Baseball Hall of Fame on the first ballot.

Koufax had a relatively short major league career due mostly to his having been over used as was the standard of the day.  Pitchers went 140 pitches in a game and were expected to come back and do it again on just a couple of days rest. Had he been using the norms of pitching today, Koufax’s illustrious career could well have gone on for years longer.

However, Sandy did stay close with the Dodgers as a pitching coach in the minors from 1979-1990 and then again returning to the organization in 2004 when Frank McCourt acquired the Dodgers franchise.  So the famous lefty was always around when Clayton Kershaw was coming up.

Now Kershaw, in his 11th year in the majors, has just eclipsed Sandy Koufax’s long standing record for career victories when he recently won game number 166.  Clayton, in typical fashion, downplayed the occasion after the game.  “It’s just hard for me to take big-picture perspective on things” he told the press. “Someday, I hope to do that”.

Kershaw now trails only Don Sutton and Don Drysdale in the modern era for most wins as a Dodgers pitcher.  Clayton has made 22 starts this year and has gone at least 6 innings 22 times, a remarkable feat for any starting pitcher in the league.  His velocity might not be up there where it once was, but his grit and determination on the mound has not changed in the least bit.  Kershaw still has that uncanny ability to get out of jams that would overwhelm most other pitchers.

Dodgers manager Dave Roberts said, “That’s something that all great ones have—the ability to limit damage. It’s that short-term memory, where when something does happen or you’re in a big spot to still have that ability to focus on executing your pitch”.

Sandy Koufax had it, and so does Clayton Kershaw.

Sportscasters for year called Kershaw ‘the best pitcher on the planet’, especially the guys who called the Dodgers games!  Vin Scully eloquently described Kershaw on the mound thorough out his early career.  Mr. Scully also called almost all of Sandy Koufax’s games, including the four no hitters and the perfect game in 1965.

So now Clayton Kershaw has passed one of the milestones set by his mentor and hero.  After the game he seemed unfazed by the occasion, “Maybe someday I’ll look back on it and think it’s pretty awesome”…..”It’s an honor for me just be mentioned in the same sentence as Sandy”.