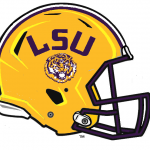 Alabama had won the last seven football games in a row  against the LSU Tigers, and they were playing at home, in front of one of the most boisterous, even rowdy, fan bases in college football there in Bryant-Denny Stadium on a beautiful Saturday afternoon, perfect football weather.

The Crimson Tide had just been replaced at the top of the AP Poll by their number one rivals, the LSU Tigers, over in Baton Rouge, where Nick Saban used to work.  No doubt that motivated Coach Saban and his football team to go out and give it their best effort, and they did.

It was a great SEC football game. It was back and forth action all afternoon with the outcome in doubt right up until the final moments of the contest. Both teams played their hearts out.  Together they managed to score a total of 87 points, exceeding the predicted over and under of 65.5 by 21.5 points.

LSU came into the game as 5.5 point underdogs but ended up winning the game by 5 with a final score of 46-41 after holding off a 21 point push in the fourth quarter by the Tide.

Both the Tigers and the Tide came into the contest undefeated and on a roll.  Each featured a legitimate Heisman Trophy candidate at quarterback and both teams were coached my master motivators, one familiar to all NCAA football fans, the other just emerging out of the bayous as a national figure and a strong candidate for NCAA Coach of the Year honors.

For LSU Head Coach Ed Orgeron, beating Alabama was the consummate victory of his carrier and surely one of the greatest days of his life. He and his wife Kelly could be seen down on the field after the win crying copiously with joy.  Not only did ‘Coach O’ beat Alabama, he probably secured the coaching job in Baton Rouge for the next decade.

Much of the credit for the Tiger victory must go to Ohio transfer and second year LSU quarterback Joe Burrow who rushed for 64 yards and completed 31 of 39 passes for 393 yards scoring three touchdowns, with no interceptions; thus moving him into serious consideration as the front runner for this year’s Heisman Trophy award.  Expect Joe to be there in New York.

LSU running back Clyde Edwards-Helaire from Baton Rouge bulled his way into the end zone three times scoring touchdowns running on the ground then added one more when he caught a pass to score yet again. He was the Tigers work horse against the Tide carrying the ball 20 times for 103 yards and hauling in 9 passes from Joe Burrow for an additional 77 yards.

The other Heisman hopeful, Tua Tagovalloa also had an amazing game throwing for 418 yards and 4 touchdowns and completing 21 of 40 passes in a losing effort to the Tigers of LSU.  Tua did have one pick and a bad fumble, however, it must be said that Tua was not playing at 100% against LSU because of a procedure he had on his ankle just 20 days before the big game.  By the end of the game his was limping visibly.

So the headline on ESPN reads: AP Poll: LSU No. 1 landslide. Folks down in Baton Rouge must love to see that one!  LSU has a proud tradition of elite SEC football which has been less than spectacular in the past few years leading to the firing of popular head coach Les Miles and the hiring of Ed Orgeron as head coach of the Tiger football team.

Tigers fans have been expecting a change and Coach Orgeron has assembled a five star coaching staff that is destined to take the Tigers back to center stage in the SEC as well as a having a real shot at another National Championship, so, here we go.