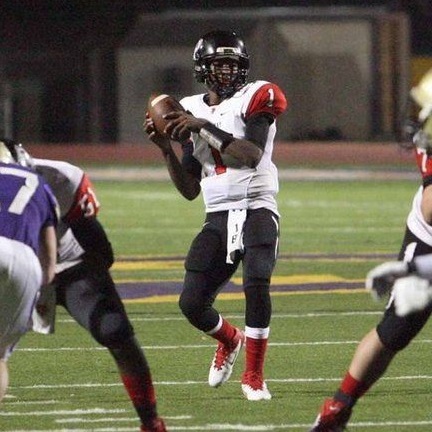 There is a new interpretation of the standing recruiting procedures issued in October for NCAA athletics and coaches and players alike are taking advantage of it already. The new guidelines allow early enrolling players to secure their scholarships months ahead of National Signing Day in February.

LSU Head Coach Les Miles has already putting the new rules to use by traveling up to Shreveport to meet with LSU signee Brandon Harris who has already made his commitment to attend LSU in Baton Rouge and hopefully put an end to the Tigers long standing quarterback woes.

Miles told reporters about Harris, “A tremendous quarterback… kind of a future for us.  He’ll have an opportunity to compete and learn the offense with the opportunity that there is not necessarily the next guy on campus.  We’ll let competition make its way.”  Like many of Les’s press statements, that one may take a while to fully figure out.

So the LSU coach made his first ever home visit during the regular season to recruit a player along with new offensive coordinator Cam Cameron.  I hope his parents and friends were appropriately impressed.  These guys don’t go out and visit just any one.

Brandon Harris is a 6’3” 195 pound gunslinger who plays for the Parkway Panthers who are undefeated this season. His boldness in taking advantage of the new ruling and going all out for LSU is admirable and appropriate according to Coach Miles. Harris has now signed a financial package with LSU.

However, the agreement is only binding on the University…not on Harris who could still sign a letter of intent with another school come February.

But Brandon Harris is a Louisiana quarterback and he wants to play for LSU.  That’s only logical.  The Tigers are one of the most storied programs in all of college football and there simply is not a bigger stage to play on than Tiger Stadium on a Saturday night.

Speaking about the change in the recruiting rules, Les Miles commented, “The new exclusion allows us home visits and to communicate unbridled.  It allows me to come down in an open week and make my first home visit ever in November.”

Miles summed it up saying, “The rules and the use of the phone are so governed by the NCAA that it doesn’t allow for a nice, easy transition.  Now they’ve told us you can see him at any time, you can talk to him by phone or by text at any time.”